1. A Clarification of Use of Mesh in Gynecological Surgeries from the President of the AAGL

5. Improve Sleep by Losing Fat from Your Tongue?

Five Bullet Friday: Women’s Health is meant to be a quick, easy to skim resource for you and other health and medical professionals to keep you up to date with all things related to women’s health. My goal for these emails will be to bring to you pertinent and helpful resources for patients (such as short videos or handouts), new research and guidelines, clinical pearls, or anything else interesting related to women’s health! If you’d like to be added to my email list to receive my Five Bullet Friday: Women’s Health, or if you would like suggest particular topics you are eager to hear about, please send an email to cassie@tayloredtraining.ca.

President of the American Association of Gynecologic Laparoscopists (AAGL) recently commented on the announcement from the US FDA which recalled transvaginal mesh used for the treatment of pelvic organ prolapsed (POP).

Dr. Fidela Paraiso explained that there is an important distinction that many people aren’t realizing: the FDA recalled surgical mesh for some – but not all – procedures related to pelvic floor disorders, which some media sources are not disclosing that subtlety.

Dr Fidela Paraiso furthers that the mesh itself is not defective and that the recall only applies to repairing of POP. It has not, however, been recalled when the mesh is inserted through an abdominal incision for POP repair, nor mesh used in midurethral sling procedures for the treatment of stress urinary incontinence.

For more details on the difference between the use of mesh for POP repairs and for the treatment of stress urinary incontinence, please see Dr. Fidela Paraiso’s full explanation in the reference below.

Uncomplicated urinary tract infection is one of the most common indications for antimicrobial exposure in otherwise healthy women. We are obviously concerned with overuse of antibiotics as it has led to drug-resistant organisms in the past 20 years. Because of this, new guidelines were created and published in the Journal of Urology in 2019 to help guide treatment of recurrent UTIs.

Note: recurrent UTIs are defined as two culture-proven UTIs in a 6-month period, or three culture proven events in 1 year. The following guideline is heavily focused on treating not only symptoms, not only cultures, but rather the important combination of symptoms combined with positive cultures. This new guideline is an important step in helping physicians reduce the “collateral damage” or over-prescription of antibiotics to slow the rate of development of antimicrobial resistance. 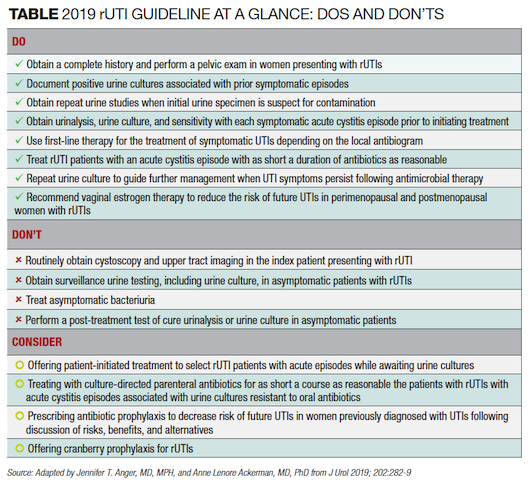 The reported prevalence of heavy menstrual bleeding in adolescents ranges from 34% to 37%, authors Dr. Borzutzky and Dr. Jaffray note in their recent paper.

This can lead to anemia, fatigue, and hemodynamic instability which may result in ED visits, hospital stays, the need for transfusion and oral or intravenous therapies to stop blood loss.

Authors say it is important to distinguish the etiology of this in adolescent girls to guide treatment, which can include hemostatic medications, hormonal agents, or a combination of both. They also note that historically the evaluation of heavy menstrual bleeding has been predominately the role of a primary care clinician or gynecologist, but given that a high prevalence of female individuals (specifically adolescents) with heavy menstrual bleeding have underlying bleeding disorders, hematologists should also have a prominent role.

New research shows that there appears to be a robust genetic link between body weight and major psychiatric disorders, an international research team has concluded.

Using data from more than a 500,000 individuals with major depression, bipolar disorder, and schizophrenia, the investigators showed extensive genetic overlap between body mass index (BMI) and psychiatric disorders. Interesting, they found that although the genetic risk variants for major depression and bipolar disorder were primary associated with increased weight, the majority of genetic variants for schizophrenia were related to reduced weight.

Authors found this quite interesting, because essentially this meant that if people had a susceptibility for increased BMI they were also likely to suffer from depression or bipolar disorder, but for schizophrenia it was the opposite: if they were at risk of schizophrenia, they were less likely to be obese. They conclude that increased body weight in schizophrenia seems to be directed mainly by diet, lifestyle, and side effects of mediation, but that it is a completely different picture with bipolar disorder and depression.

Authors further conclude that, “aligned with epidemiological findings, [their] results underscore the importance of considering both metabolic and psychiatric factors when trying to understand and treat mental illness effectively.” They are hopeful that this could lead to more prediction tools and better treatment choices for individuals with severe mental disorders.

5. Improve Sleep by Losing Fat from Your Tongue?

A new study published in the American Journal of Respiratory and Critical Care Medicine just this month discovered that reducing the amount of fat in your tongue improves sleep apnea.

Previous research has shown that obesity is a key risk factor for sleep apnea, and that those who are obese who suffer from the condition tend to have considerably larger tongues with a higher percentage of tongue fat than obese people who do not suffer from sleep apnea.

So, how do you trim down your tongue fat? It comes down to overall body fat loss, the study found. “This study shows reducing excess fat in general can reduce tongue size. [And] the more tongue fat you lost, the more your apnea improved”.

This leads authors to believe that tongue fat is a potential new therapeutic target for improving sleep apnea, and they suggest future studies explore whether certain diets are better than others in reducing tongue fat, and whether cold therapies might be applied to reducing tongue fat.